“Inside Rec Room mamamonkey has shown an incredible natural talent when it comes to community organizing. Not only does she bring a huge amount of value to Rec Room through creating, hosting, and documenting player events, but she also spreads her skill set and enthusiasm to other players. Outside of Rec Room she’s a patient and passionate advocate for our community and is someone whose opinion we have grown to trust without question when it comes to on the ground insights on our playerbase. She is a pleasure to work with and would be a great addition to any team looking to build a better community!” ~Shawn Whiting, Community Designer, Against Gravity

“Mamamonkey has been an irreplaceable force for the Rec Room community. Her exuberance and excitement for our community are unmatched and clearly evident in every minute she spends in our social VR game. Since the beginning she has been organizing and running events, often times without any extra help from our development team. Many of the events she has run and the suggestions she has made have led to ideas and inspiration within our team that then turned into new game modes and more freedom for the community to create their own experiences within Rec Room. She has been such an integral part of our development and growth that we are remiss to share her, but know that she will continue to inspire other communities and development teams to make more complete and exciting experiences for all. Thank you for all you have done for us!” ~ Alkmaar, Against Gravity

“Tamara’s ability to organize, promote, and run events in Rec Room is unmatched. From one-off mini-games to tournaments that span months Tamara has been a leader in creating and evolving our community content. She has also been a mentor for budding community organizers. She is an overwhelming force for good in our community.” ~ BeeBoz, Against Gravity

“I’ve played a lot of online and social video games and been to a lot of events in them and I’ve never gone to any as well organized as mamamonkey’s. The events and games that she puts together are always fun and engaging, and mamamonkey always knows how to deal with problems that arise and people that break the rules in consistently fun and fair ways. I’m glad to have attended her events and to have her in the online communities that I am a part of.” ~Gearhardt

“If it weren’t for mamamonkey, I would never have discovered this close-knit community of Rec Room players! Not only has she encouraged me to be myself and introduced me to people, she’s helped me to be a more community-driven and social person. I’ve been able to make friends because of her, and will be forever thankful!” ~Natti-Lin

“Rec Room was one of my first games in VR and I met mamamonkey early at an event that she was helping to host, who without which it would likely not have been held. A struggle with the internet is playing with people across the globe but mamamonkey always manages to be inclusive to as many timezones as possible, and accommodating to everyone’s different schedules. With mamamonkey in game, you know that things will get done as she can take the initiative while others may just stand back.” ~alifeee

“I’ve only gone to two of your events, they were both really good. Never a lame moment.” ~Star Centurion

“Mamamonkey is a shining beam of light! She is always welcoming and friendly to everyone in the community. If there’s an event in Rec Room you can bet mamamonkey is involved; whether it be organizing, helping out or just participating. She’s able to create fun and original mini games using the game mechanics in ways I’d never think of!” ~bubbaganush

“Using only Reddit, Discord, and in game word of mouth, Mamamonkey created amazing events with great turnouts. The events were so successful that the creators of the game where she hosted events started creating features to support them and make them easier. She also started a series of social clubs that are now supported by her and others if the community. I myself now host one of these clubs, which would have not been possible without her help.” ~DrummerGeek

“Mamamonkey began hosting events in Rec Room at a time when many different people were doing such. She very quickly rose above everyone else as a quality host & became the go-to for an event host & ended up hosting multiple official events in Rec Room. She keeps everyone under control, explains the rules & how to play in an easy to digest manner & most of all, makes sure everyone is having fun. Almost everyone that hosts an event goes to her for advice, if not to ask her to co-host to make sure their event goes smoothly. As a result of Mamamonkey’s feedback from hosting events, Against Gravity (the developer of Rec Room) has implemented multiple in-game tools to help a host maintain control of their event. I can say with confidence that Rec Room is a better game as a result of Mamamonkey’s influence on the community & she’s accomplished all of this as a volunteer.” ~I Kill Pigeons 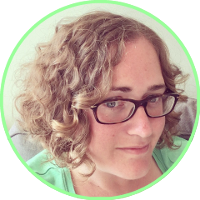 I have been working in community management since 2017, and feel so lucky to have this job every day! I have a passion for nurturing and guiding communities as they develop and grow. I am experienced in user support, moderation, social media, contests, and event planning.